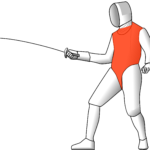 Important: Colored lights (red and/or green) indicate a valid touch. White lights indicate the touch was off target, which means no points are awarded.

One-light-actions: First things first. One-light actions are pretty easy to understand: whoever scores gets the point. But, it’s helpful to see how these actions look like before adding more complexity.

Two-light actions: Now it’s time to understand actions when two lights go off (whether it is red and green; red and white; green and white; etc).

Remember: In foil, there is right-of-way. This means that when both fencers hit each other at the same time, the fencer with the initiative (the one who is going forward OR makes contact with the blade) gets the touch.

Examples of right of way:

Visit our advanced fencers page to take your fencing to the next level!

Thanks for following us!